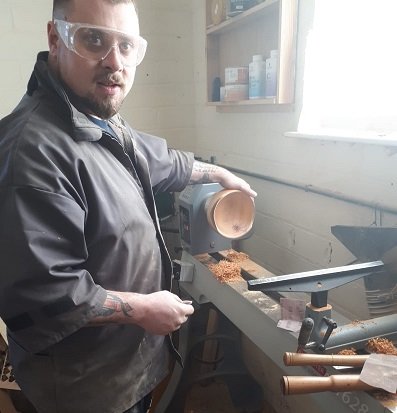 Creative therapies can help veterans with anger issues, addiction, or other turmoil.

They help people to release negative emotions, relax, and take their mind off their issues.

Church Homeless Trust funded new tools, supplies, and safety equipment so that residents of a homeless veterans’ scheme could take part in woodworking sessions led by the Veterans Woodcraft Organisation.

Since then, the scheme has seen an inspiring boost in resident veterans’ confidence, attitude, and ability to tackle problems.

Chris Morgan, Lead Trainer at Veterans Woodcraft who himself suffers from PTSD, explained the differences he saw.

At first, the veterans were anxious and struggling to mix with others. Within minutes of their lesson starting they began to relax, concentrate on the task at hand, and forget about their other issues.

They focused on what they were producing. If struggling with an intricate detail, they were encouraged to stop, have a coffee, and when ready, start again.

After initial training, the group was able to make bowls, pens, and cups as Christmas presents for family and friends.

One man designed and carved a bespoke urn for his mother’s ashes. The guilt of not being able to afford a suitable container had been weighing on him. Making the urn greatly helped his mental health.

They returned to the homelessness scheme with smiles, excited to show off what they had achieved. Their confidence and self-belief was evident.